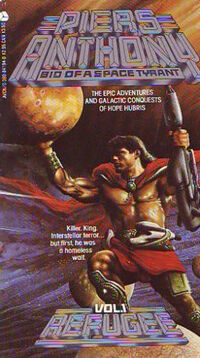 Bio of a Space Tyrant series is a six-book science-fiction series by Piers Anthony based within the solar system. The series revolves around the character Hope Hubris and his family, and charts Hope's ascent from poor Hispanic refugee to Tyrant of Jupiter, a single person heading the Executive, Judicial and Legislative branches of the government. It is considerably more adult-themed than many of Anthony's earlier works.

The novels are set in a future several hundred years distant at a point where the nations of Earth have expanded into and filled the solar system. Various planets, moons and asteroids within the solar system have political, religious and geographical affiliations similar to those on 1980s Earth. Many events in the series parallel modern-day situations; for instance, Mars is controlled by the countries formerly comprising the Middle East, and they have the largest supply of iron, which is the primary fuel in Anthony's universe. Ganymede parallels Cuba, and has a Communist government allied with North Saturn's, which corresponds with the Soviet Union, and a "missile crisis" is an event in the series. Many other such correspondences abound.

The series is presented as a first-person autobiography of Hope Hubris, and the broad strokes of his life are painted from the earliest pages, including his status as a perceived tyrant and womanizer. It is clear from the introductions and epilogues that Hope died before the publication of his memoirs and that his career as military man, politician, executive and statesman was greatly misunderstood by the public, most notably his various affairs with women, which are a major focus of the series.

Refugee (1983) ISBN 0738806935: Follows Hope and his family's flight from their home on Callisto to Jupiter. Hope's family sets out in a "space bubble" with many other refugees. The group is attacked multiple times by space pirates, and most of the adults are raped, killed, or kidnapped by the end of the story.

Mercenary (1984) ISBN 0380872218: Chronicles Hope's years as a migrant laborer and 15 year career in the Navy, largely under the guidance of his sister, Spirit. One of the stranger aspects of the Navy described in the book is called the Tail, a militarily-administered bordello that all servicemen are required to use.

Politician (1985) ISBN 0380896850: Hope's marriage is a major focus during the story about his political career as he ascends through the Jupiter political system, culminating in his election as President. One of his chief rivals is a man named Tocsin, who has some of the characteristics of Richard Nixon. The book begins with Hope being held captive on a spaceship, while his captors attempt to brainwash him into being a pawn of unknown adversaries (it is implied that Hubris' political rival Tocsin is involved.)

Statesman (1986) ISBN 073880701X: The waning years of Hope's life in exile after leaving office, mostly dealing with his advocacy of a new light-speed travel method and attempts to foster unity and peace in the solar system.

The Iron Maiden (2001) ISBN 1401043968: Covers the same period as the first five books but from the point of view of Hope's sister, Spirit. Fills in many gaps when the two siblings were apart.

Many of the situations that occur in the series are direct parallels to real situations found on Earth. For instance, Hope at one point is stationed on Chiron (an analogue of Cyprus) in order to keep the peace between colonists of Greek and Turkish descent; the entire situation of Hope's family, Hispanic refugees from a planet analogous to Hispaniola, attempting to enter Jupiter resembles problems in the U.S. with immigration, including Hope's inability to find work as anything other than a poorly paid agricultural worker.

The solar system of Anthony's universe directly parallels the political makeup of modern Earth, as outlined in appendices in the series. Following are the many correspondences:

Retrieved from "https://xanth.fandom.com/wiki/Bio_of_a_Space_Tyrant?oldid=7906"
Community content is available under CC-BY-SA unless otherwise noted.