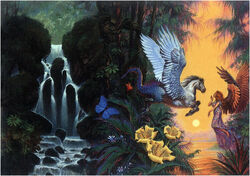 Harpies are dirty birds with human bodies. They like to cuss and fight goblins. Most harpies are female and all the males are considered to be Princes.

During the events of Dragon on a Pedestal, the goblins and harpies near the Gap Chasm found they had half talents and had to find the one of the other species to make a full talent.

Retrieved from "https://xanth.fandom.com/wiki/Harpy?oldid=9826"
Community content is available under CC-BY-SA unless otherwise noted.