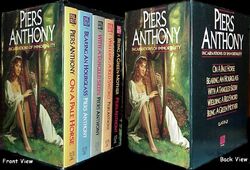 The Incarnations of Immortality is the second longest series written by Piers Anthony at seven published novels. The series heavily focuses on anthropomorphic personifications. The first seven books each focus on one of seven supernatural "offices" (Death, Time, Fate, War, Nature, Evil and Good) in a fictional reality and history parallel to ours, with the exception that society has advanced both magic and modern technology. The series covers the adventures and struggles of a group of humans, called "Incarnations", who hold these supernatural positions for a certain time.

Incarnations uses its premise to ponder questions regarding the nature of life. As each character goes from a mortal life to the "office" of an Incarnation, they are forced to contemplate their actions on a daily basis. Each Incarnation may use their office, within limits, as they see fit. This system humanizes what would otherwise be impersonal forces, leading to both extensive considerations of the effects of the incarnation's work and the impact it has on humans.

Another humorous side of Incarnations is the portrayed magic/technology duality. Most series emphasize one or the other means of understanding and manipulating the world, but in Incarnations each method is equal in usefulness and respect. This leads to a number of amusing parallels, such as competition between automobile and magic-carpet manufacturers. By the future time period of Norton, magic is referred to as the Fifth Fundamental Force, with its own primary particle, the Magicon (similar to a graviton). A few other series have used the technology/magic combined motif, notably Apprentice Adept, another series by Piers Anthony, and Four Lords of the Diamond by Jack Chalker.

Anthony uses the number five extensively, often with things that exist in fours in our world. The five Incarnations are associated with the five elements (Death with Earth, Fate with Water, War with Fire, Nature with Air, and Time with Void), and often other items with fives (the previously mentioned Book of Five Rings). There are five fundamental interactions, magic being the fifth. The Llano consists of five songs. In On a Pale Horse, Gaea teaches Zane five patterns of thought, each represented by diagrams of five short lines.

A fourth theme of Incarnations is the multigenerational human story between the Incarnations. Previous characters repeatedly appear in later novels, and by the final novel, every major character is related by blood, marriage, or affair.

Retrieved from "https://xanth.fandom.com/wiki/Incarnations_of_Immortality?oldid=3618"
Community content is available under CC-BY-SA unless otherwise noted.