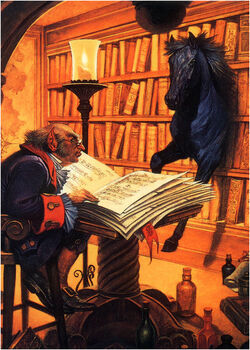 A night mare is a horse-like creature that brings bad dreams to punish people for doing bad things. They are ruled by the Night Stallion.

Cenmares are the crossbreed offspring of a night mare and a centaur. The only known cenmare is Chemare.

Retrieved from "https://xanth.fandom.com/wiki/Night_mare?oldid=8715"
Community content is available under CC-BY-SA unless otherwise noted.