The Sword of Wisdom was an artifact, one of the three swords made by the ancient inhabitants of Xanth. This particular sword bears six gems and then conveys wisdom to its bearer, but the gems appear only after he has performed certain tasks. It was in the possession of the inhabitants of the Isthmus Village, and its history and purpose was forgotten. It was given to Dug after saving the village from the Censor-ship. Dug carried it through his travels, while a gem appeared as he progressed. He learned more about it from Humfrey. 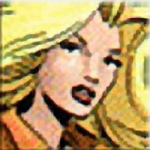